You are here: Home » Health » Why choose to be vegetarian? 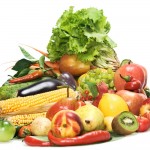